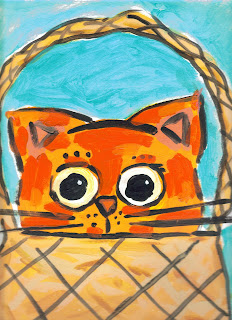 I went to the SCBWI Carolinas conference in Charlotte this September (fun!) and was very fortunate to meet the fabulous illustrator David Diaz. It's taken me awhile to process how seeing his portfolio influenced me. His work (which is not the kitten pictured here!) really blurs the line between illustration and fine art.

What line? some of you may be asking. I've heard the arguments before. But, in my mind, there's a huge difference between creating art based solely on having an artistic experience and creating art for a book. Even a beautiful picture book. I once met a painter at the Vermont Studio Center who said (paraphrasing) painting is like taking a walk in the woods. You know where you're starting, but you don't know where you'll end up.

When you're illustrating, you must have some idea of where you'll end up, right? If the text is about a group of penguins on a journey to Hawaii, you can't do a self-portrait. I mean, I'd like to see your self-portrait. But your art director probably would not.

David Diaz is an illustrator. But he showed us all kinds of art, which looked totally free.

And made me take a closer look at my portfolio. And about how I feel about my portfolio. I think there are some great pieces there. But I want to find a way to feel more free. Have more fun.

So I got out my acrylics and my big brushes. I've been saving them for the day I have time to go into my studio and create art for myself. Which may be a long way off, if I truly want to publish my middle grade novel and my picture books and illustrate. (and I do!)

I used my acrylics and big brushes to paint this kitten for a picture book I'm working on. He's getting ready to leave his basket for the first time. To journey forth to new adventures. And have fun.
Just like me. 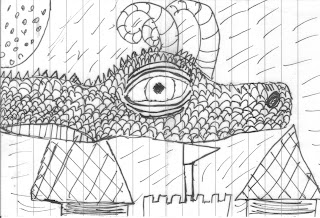 Just Imagine..... a time when Dragons roamed the Earth. Sticking its awesome head between two turrets of a woeful castle. Because a Dragon with hideous horns is getting ready to hurl flaming fire at it and do other terrible stuff. But isn't the dragon beautiful.
Imagine.

That's what my daughter did. She drew this picture. She goes into her room, turns on an audiobook (Castle Corona by Sharon Creech is one favorite) and draws these terrible drawings. But great! Because dragons are terrible, but great. (Harry Potter I reference and I hope you all caught it)

She also did this one: 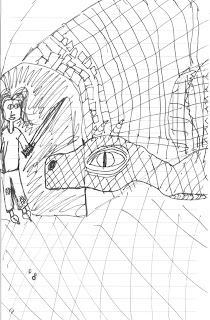 And here comes the peasant girl in rather tattered looking clothes (note the patches on her pants!) who is going to slay the evil dragon.

What Audrey Niffenegger and I Have in Common

We both write? True. We both draw? True, but that's not what I'm talking about. We both wrote runaway bestsellers that were made into major motion pictures? Well, one of us did. Not me unfortunately. We both were presenters at the Carolina Mountains Literary Festival in Burnsville, NC last weekend? Yes! 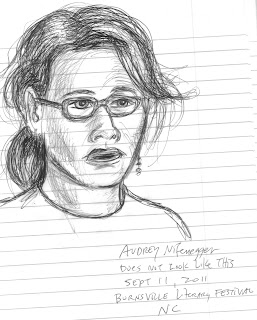 Of course, I was there with my FABULOUS critique group, The Secret Gardeners. Our panel was called What Makes A Successful Critique Group. Which was about how, for example, two members of the SGs recently secured wonderful agents. And how we all inspire, cojole and urge each other on to be the best we can be. And how we use incentives for success, such as champagne and chocolate. My stomach was all jumbly on the ride there while practicing speaking Slowly and Clearly, which is not my forte. I am LEARNING to be more comfortable with public speaking, but I am still in the uncomfortable stage. I was hoping less than 3 people would show up, so as not to be overwhelmed by a huge audience. Was Audrey Niffenegger experiencing these same emotions? We arrived in the Courtroom which was our venue in the small, adorable town of Burnsville and sat in what I suppose might be called the Lawyer Table. We did not want to be in the jury box, as one early-arrival audience member suggested. We're not that kind of critique group. About 15 people showed up. And they all looked nice. I read my intro about our group. People laughed at the appropriate times. We had a lively discussion. Everyone seemed interested. I spoke slowly. Afterwards, many people told us how much they enjoyed it. And then we all went to hear the brilliant Audrey Niffenegger. And she really is brilliant, her artwork is amazing, her novels are amazing, she read us some wonderful, funny stories. But I noticed one other thing about her. 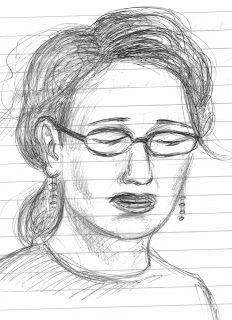 (This doesn't look like her either. If her presentation had gone on for another two hours, I might have gotten it right) She is just a person. A sweet, down-to-earth person, from what I could tell after hearing her and seeing her for 45 miniutes, but also just a person. Sometimes her hair escapes from her hair band. Maybe she even sometimes feels nervous. And once upon a time, she was trying to get published and not wildly famous. She might have once been in a critique group, sharing her work and dreaming of the day when her work would be out in the world for everyone to see. So, if I could be a time-travelling writer and could go back to that time when she was working and hoping and not knowing if one day....Well, then maybe we actually have two things in common.
Posted by CL at 11:25 PM 2 comments: 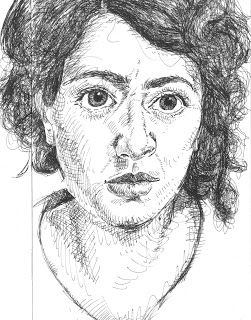 For years now, I've been getting older.

We're all going through it, right? Though before I turned 40, I didn't give it much thought. Now I get out my mirror for a self-portrait and have to decide how many wrinkles to include. How dark to make the darkness under my eyes.

Include it all, I say! Because aging is what I plan to keep doing, as long as possible.

Acceptance is one thing. But how can I embrace the fact of getting older? Well, one way is to look at this drawing I just did, look beyond the wrinkles and see an accomplished artist with a strong line and a strong sense of rendering. There's real feeling here, the result of years of honing my skill, through many hundreds of drawings. And I can only get better, as I continue to work on my art (and my writing.)

So is it aging or is in improving?
I guess it's all in how you decide to look at it. 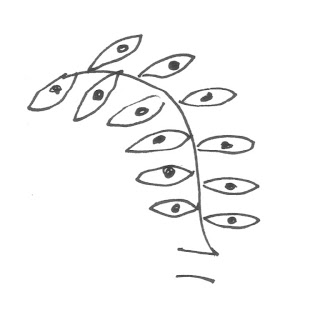 I've drawn a multitude of self-portraits. Many portraits. Some street scenes. Millions of cats. But there's another kind of drawing I want to do more of.

There's a great song called Doodlin' with the line:
Cause when you doodle, then your noodle's flying blind....

But I think it's more than that. Sometimes I have to draw without a goal, maybe for fun, maybe to access the strangeness in my mind. So I can see what's happening up there. Clear out the junk. Bring the real stuff out into the light.

I love the interaction between my brain and my hand which comes out through my pencil, pen or brush. Which I don't know what it will be until it's there in black and white. Surprise!

Can we ourselves surprise ourselves? I like to try.

Because it feels awesome when my noodle's flying blind. I need more of that freedom. Stream of consciousness. That's what Jackson Pollock was doing, right? I need to let my pen play. Just go. Just do it. Endlessly.....

From the Mixed-Up Files of my Mind 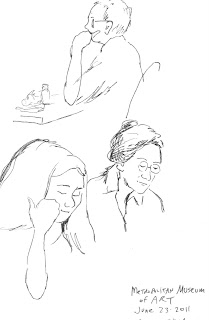 From The Mixed-Up Files of Mrs. Basil E. Frankweiler by E. L. Konigsburg is one of those hugely important, unforgettable books from my childhood. Two smart, funny kids run away to live for a week at the Metropolitan Museum of Art- what could be better?

Now one of my happy mommy moments is sharing favorite childhood books with my daughter, and did we have a great time listening to the audio book of The Mixed-Up Files! (yes, we did)

So when planning a trip to NYC, of course the Metropolitan Museum was part of the plan. I knew the fountain described in the book was no longer there- was it ever? I didn't think Michelangelo's Angel was real- was there a similar statue?

The first person at the Information Desk didn't know anything about the book. The second person smiled and handed us a pamphlet called "The Mixed-Up Files" Issue." We found out there's no statue such as described in the book. "The Fountain of the Muses" was once on display, but now you have to imagine it while looking at other museum fountains. The bed they slept on isn't on display, but similar ones are. We went into the Annie Laurie Aitken Galleries looking for a similar bed. We found a guard. "We read 'The Mixed-Up Files...' I said." She smiled and said, "That is a work of fiction, you know."

The Fancy beds and writing desks were fabulous. "Let's run away," I said to Madeline. "No," she said, "but if you do, I'll know where to find you."

We had a wonderful time walking around the museum (and especially the Egyptian wing) thinking about Claudia and Jamie's adventure. We had our own adventure. We went to the cafeteria, of course. Madeline had a kids meal in a cardboard taxi cab.
"This is silly," she said. "I'm a little old for this kind of thing." Sounds like something Claudia would say. I only wish we could've ordered a sandwich from the Automat.

Looking over the pamphlet, we saw an insert: draw the room you would run away to and write a few lines about it, turn it in to the information desk and get a 'museum goodie.' Madeline drew and wrote about a room with a comfy bed and a cat. We went to turn it in.

The first person at the information desk didn't know what we were talking about, but she spoke to her supervisor. Now Madeline is looking forward to receiving her 'goodie' in the mail.

I spent a day with my daughter in the Metropolitan Museum of Art, reliving one of my favorite books. I guess I already got my goodie.
Posted by CL at 10:54 PM 8 comments: 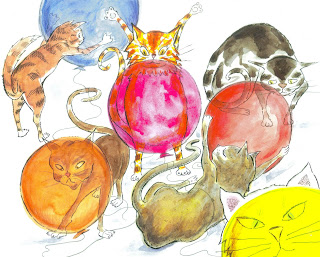 Because life is so precarious... like a birthday balloon about to get popped by a cat's claw.

Because balloons are so colorful... reminding us to take joy in the everyday.

Because cats are so in the moment... reminding us to live in the present (and maybe you'll get a present.)

Because balloons are transparent... letting light in is how they shine.

Because cats are silly!

What's your favorite reason for balloons and/or cats?
Posted by CL at 8:12 AM 2 comments: